Please visit the Sitemap to see the full range of information on this site
MountainWalk.co.uk is produced by Trish Haill Associates  Copyright

Have you climbed Ben Nevis, Snowdon or Scafell Pike?  Or taken part in the Three Peaks Challenge?  Or have a special walk you'd like to share?  We'd love to here from you!  Join us on Facebook or Send us an email.
Tweet
The Watkin Path

Walking to the Snowdon Summit Via the Watkin Path

We choose to walk the Watkin Path purely and simply due to the fact we were staying in a holiday cottage in Beddegelert.  We had driven past the Miners Track car park in the morning earlier the week, and noted it was quite full early on.  The Watkin Path car park was relatively empty.  We were not aware at the time that this is probably the hardest walk up Snowdon, as it starts from the lowest point and climbs a full 1,015 metres (or 3,330 feet)

History of the Watkin Path

The path was name after Sir Edward Watkin, a Liberal Member of Parliament.  He retired to live in Snowdonia and was responsible for the first designated footpath in Britain when he extended the path that went to the Slate Quarry all the way to the summit for tourists.  William Gladstone opened the path in 1892 addressing a crowd from a rock that is now called the Gladstone Rock to commemorate the occasion.  Gladstone was aged 82 at the time. 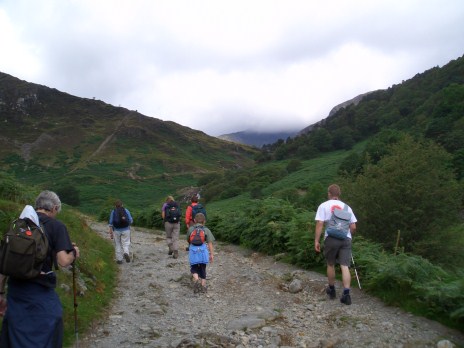 Setting off along the old track to the mines 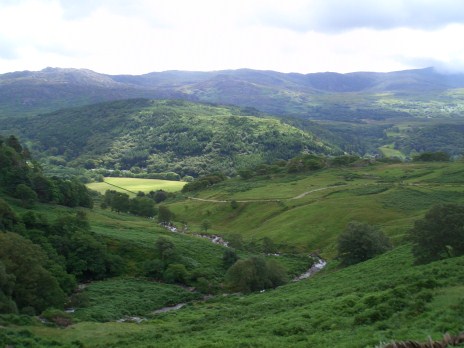 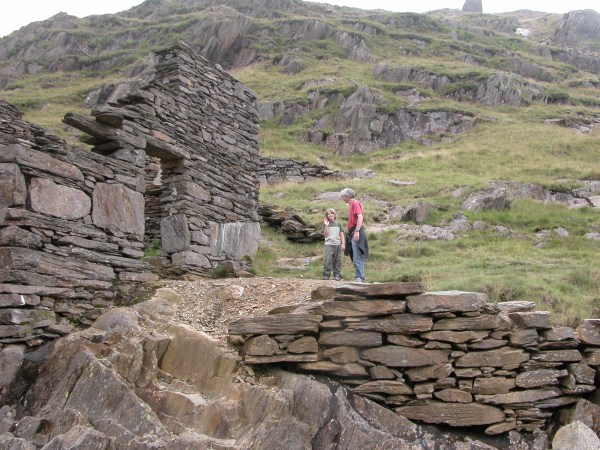 The old mine buildings - good for a quick bit of exploring 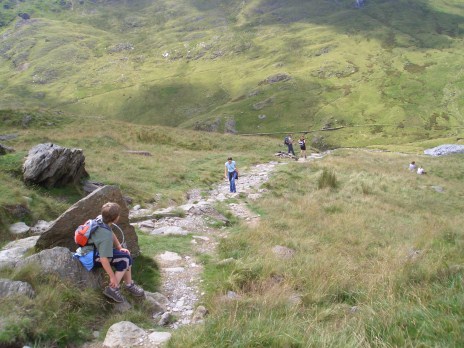 Slightly steeper going coming up towards the scree slope 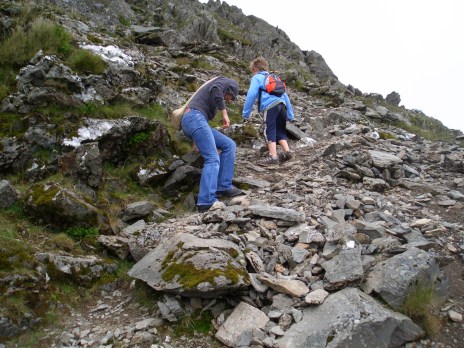 The path is ill defined up the scree slope, and it's a bit of a scramble at times 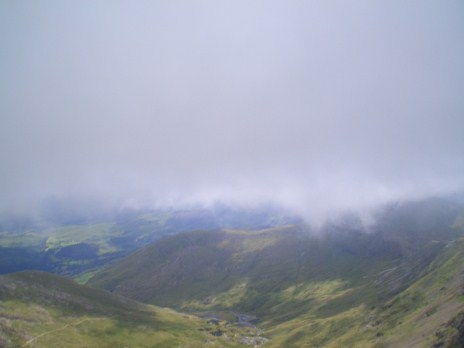 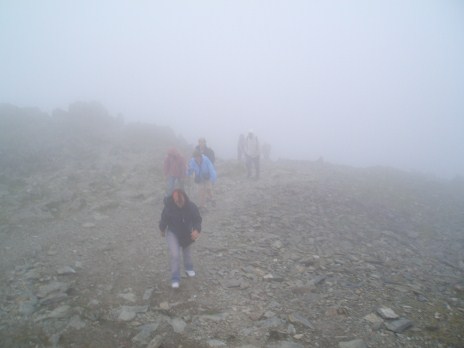 Finally at the top of the scree, and a flatter walk up to the summit

Misty or not, you just have to take that summit photo! 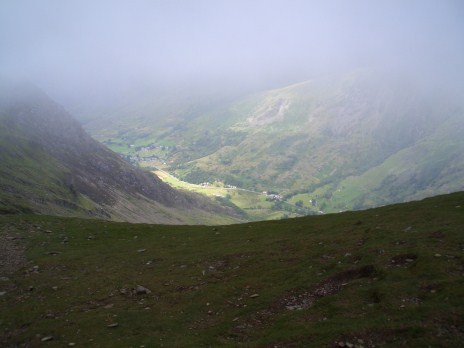 On the descent - as we come out of the cloud we can see it only settled on the summit - the valley had been in sun the whole day!

It was quite a family walk - my husband, 11 year old son, and two grown up stepdaughters with their partners.  The walk starts quite gently going through ancient woodland, and then opens out to some lovely scenery.  Its a pleasant start following the track that used to lead to the quarry.  Along the way we passed the Gladstone Rock and then came to the ruins of the mine buildings - the old barracks for the South Snowdon Slate Quarry.  We stopped for a breather and the boys explored the old buildings - my husband ending up slipping in the water when he crossed back over the stream much to everyones amusement.  Nothing hurt but pride.

The valley was used as the location for the film 'Carry on up the Khyber', and there's more history here as on the walls or the old quarry manager's house are pock marks bearing evidence to the WW1 troops target practice during training.

After the Mine Buildings

The track finishes near the old ruins, and you are now on the path that Watkin built.  The going starts to get a little steeper, and you can see the well defined path snaking above you, but the scenery is beautiful so we made many stops to take photographs.  As we were climbing higher we were still in brilliant sunlight, but clouds were coming in over the summit.  There were still tremendous views looking down - you can really see for miles from this vantage point.

The top of the Watkin Path is over scree which must be treated with the utmost respect.  Its steep, and slippery, and loose underfoot.  The rest of the Watkin Path is fairly well marked, but it's easy to loose sight of the way over the scree - there are  some dangerous crags and cliffs so proceed with extreme caution.  Children, in particular should be carefully watched.

As we reached the scree the mist came down in earnest, and it was eerie and a bit scary.  We couldnt see very far around us, and were often scrambling up a path with a sheer drop to the side - and the mist hid how far wed fall if we slipped.  The scree path is known for accidents and the final path is very steep.  It was a matter of getting up however you can.    I fared better than the others as I had a pair of walking poles which helped me balance.

It was a great relief when we came to a flatter area, and we made note of the finger rock marking where the Watkin Path meets the Rhyd Ddu/South Ridge Track - we had to remember this marker so we could make sure we came down the correct route for the descent!

It was a welcome relief to finally reach the top, take a few photos in the mist and have a welcome cup of tea and a warm up in the summit café.  During our walk we had stripped down to T-shirts, and as we entered the mist put on waterproofs and jumpers!

The scramble up the scree had really scared my son and step-daughters, and they refused to walk back down the same way.  It was decided that they take the Llanberis Path down, and the rest of us would go back to the cars and then drive round to pick them up.

We found the finger stone and started the descent.  I had elected to take the Watkin path again as it was shorter, but I was a bit concerned as it had been unnerving on the way up.

Although still in fog I didnt find coming back down the scree as bad as going up - probably because it took less effort, leaving me better able to focus on where to put my feet.  Good footwear is absolutely essential on this route!

Coming back down off the mountain top we left the mist behind, and made it back to the car in good time.  In all we were on the mountain for about 7 hours, and it was an enjoyable day for everyone - even if none of us could walk far the next day.  Oh, that's with exception of my 11 year old son who probably could have done it all again.

Although supporting me well and having good grip, I had on a pair of cheaper walking boots.  As I walked down Mt Snowdon I could feel my toes hitting the front of my boot step after step, and my feet were in agony at the end of the day.  A little while later I lose both big toe nails.

For my next mountain walk, up Scafell Pike, I invested in a more expensive better fitting pair, and my feet didn't suffer at all!

Something that I can attest to is that in poor weather the scree is very dangerous.  If you are attempting to climb the Watkin Path I would really advise that you avoid a misty day, or a day when there is snow on the summit unless are experienced.  Of course, when we set out it was a lovely sunny day without a cloud in the sky, so it's not always easy to avoid.

If it gets very windy or foggy as you approach the scree, do consider whether it might be best to turn back and make another attempt another day.  You'll probably find you won't be alone in this decision.